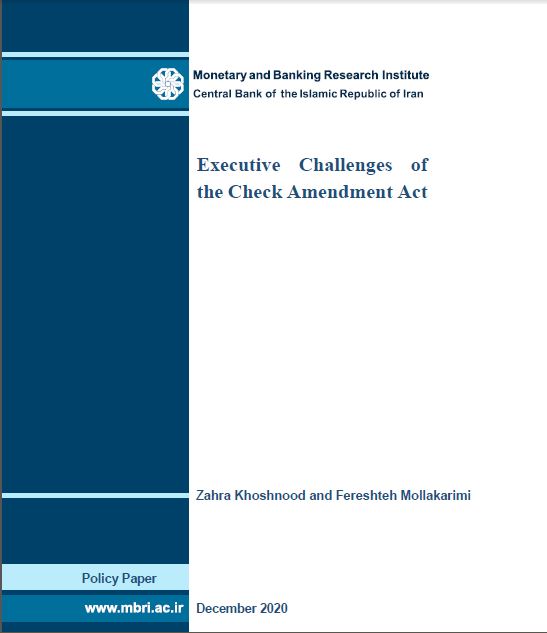 The policy report on the law's organizational challenges amending the issuance of checks was compiled and published by the Monetary and Banking Research Institute.

According to the public relations of the Monetary and Banking Research Institute, in the executive summary of this report, which was compiled by Zahra Khoshnood and Fereshteh Mollakarimi, it is stated: The Check Amendment Act, as the latest amendment to the check law, was notified to banks and credit institutions in December 2016 by the Central Bank for implementation, and it consists many changes in the procedure of supervising the check. These changes, which were mostly based on system platforms, were in dire need of time intervals for the effective implementation of the technical infrastructure and the resulting changes in the procedures governing the issuance and settlement of checks. Although not all aspects of the infrastructure required by this law have been implemented so far, in the operational dimensions, banks and credit institutions face challenges to comply with the law effectively due to the existing complexities.

Therefore, to identify the challenges in the current procedure and infrastructure and the required and unimplemented infrastructure, meetings were held with representatives of the Central Bank, banks, and experts in this field in the Monetary and Banking Research Institute. Based on the issues raised in these meetings, focusing on the operational aspects of the provisions of the Law on Amending the Check Issuance Law, challenges were addressed in 14 general areas that cover the followings: Electronic check; Inform the account holder of the returned check; Lack of a unified approach in imposing restrictions on the provision of banking services to the returned check account holder; Problems of the Central Bank in suspending restrictions on enterprises important for economic security; Elimination of the effect of returned checks with formal consent; The problem of banks in inquiring about not filing lawsuits for checks to eliminate the effect of returned checks; Time-consuming procedures for eliminating the effects of returned checks due to lack of systemic communication; Credit ceiling determination pattern; Uncertainty of the validity date of the checks; Case checks; Procedure and scope of questionable information; Problems of banks in declaring missing; Problems of banks in forging checks; And the abuse of some unqualified individuals in obtaining checks.

Comparing these challenges with the ongoing actions in relevant institutions, including the Central Bank, the Judiciary, and the Ministry of Industry, Mines, and Trade, it was observed that effective steps had been taken in the areas of systems, regulations, and procedures. Even with the conclusion of some memoranda, these problems of banks and credit institutions with the banking checks will be largely eliminated in the near future.

These measures can be summarized as launching the "PICHAK System" in tracking check exchanges and even upgrading the existing systems of SAYAD and CHAKAVAK, developing new current account instructions and a pattern of blocking accounts by the Central Bank, procedures for submitting requests for suspension of restrictions for important enterprises, the issuance of new SAYAD checks, a memorandum of understanding between the Central Bank and the Judiciary on online access to final court rulings, and the launch of a financial sentencing system.

However, in some cases, there are still challenges to implementing this law in the banking network for a longer period, which is generally based on the lack of technical or regulatory infrastructure. In this regard, we can mention, for example, the lack of necessary technical bases for the use of electronic checks, which requires basic measures not only in the Central Bank but also in banks and credit institutions.   Also, the expansion of query portals of the account holder status, especially through the QR Code, is classified in the form of upgrading the technical infrastructure. Incompletion of the NAHAB system and lack of systematic authentication are other shortcomings of the current system and technology.

In the field of regulations, the Central Bank issued a circular, clarifying the procedure for informing the return of checks to the account holder and obliging banks and credit institutions to implement it, setting strict regulations in obliging banks and credit institutions to block the accounts of the customer holding the returned check, and the determination and communication of the credit ceiling model in the form of a circular by the Central Bank that can solve many executive challenges in this area and lead to the effective implementation of this law in the banking network.

However, in addition to the above two areas, improving current procedures, especially in the number of informable items in inquiring about the account holder's credit status to cover items required by law, synchronizing check registration in PICHAK with inquiries to ensure the accuracy of the information and promote "check registration culture" in this system, in addition to the effectiveness of the consent in eliminating the adverse effects of the check, is only systematically observed in the PICHAK system after its approval by the final holder of the check. Also, increasing the authority of this law in applying the punishments of Article 6 in reducing the negligence of the branch officials in not adhering to the relevant legal duties is of great importance.

In addition, due to the system-oriented nature of the major executive development based on the PICHAK system, the design of this system should be user-friendly and consider measures for people without a smartphone or without Internet access in the new procedure for tracking check exchanges. In this regard, considering the role of user awareness and culture building in this transformation's success, the Central Bank must take the necessary measures before the system becomes operational in the banking network. Also, to launch such a wide-ranging system with ancillary applications, it is better to be calmer and confident and not just approach the deadlines in such decisions.