Requirements and strategies of active monetary policy in the Iranian economy 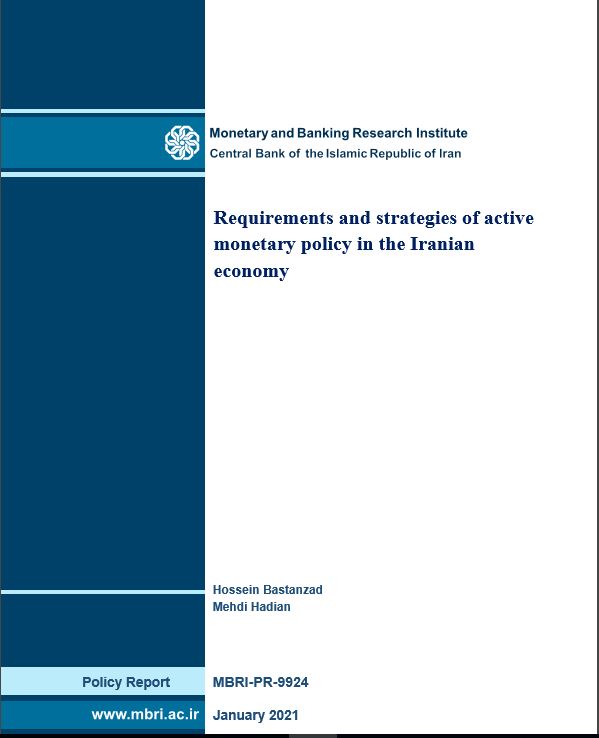 The Monetary and Banking Research Institute published the policy report on active monetary policy requirements and strategies in the Iranian economy.


According to the public relations of the Monetary and Banking Research Institute, the management summary of this report states: Open market operations as a traditional policy tool that has the most active and effective use in industrial and emerging economies over the past five decades, have recently been used in the Iranian economy. Such an approach aims to enable the central bank to react actively and effectively to interest rate dynamics and to guide the economy's interest rate vector in a direction consistent with policy objectives. In this regard, despite the need to transfer monetary policymakers from monetary base management to interest rate management, the challenges of poor performance and the limitations of lack of diversity in monetary policy instruments, institutional and regulatory weaknesses, and the lack of a unified money market have necessitated monetary policymakers to apply extensive reforms to manage and address these challenges. In other words, given the experience of the past few decades, as well as the formation of institutional structures in the mutual financial relations between each component of the government, banks, and the central bank due to continuous monetization of net gross savings deficit (financial dominance), continuous net growth of foreign assets, periodic exchange taxes, as well as the high share of off-balance sheet transactions in monetary base growth, targeting monetary aggregates in the general and monetary base in particular during the transition period, and the final realization of the key interest rate targeting approach will be necessary to adjust macroeconomic interest rates. However, during the transition period, basic measures need to be taken to improve monetary policy instruments' efficiency and effectiveness in the short and medium-term. In this process, strengthening regulatory and precautionary measures on the growth of banks' balance sheet items, consolidating public sector financial relations and banking network with the central bank, deepening open market operations by launching a dedicated trader system for underwriting and marketing government debt securities, in line with the development of the debt market through government-owned debt and securities to public entities and legal persons; the securities of public institutions and their ranking, the variety of money market instruments including funds and money market accounts will be of particular importance.

Policymaking in different macroeconomics areas requires various steps such as explaining the policy environment's requirements (economic-political), introducing effective policy tools, explaining the ultimate and intermediate quantitative goals, predicting the time for achieving goals, and finally designing a monitoring system. In the field of monetary policy, due to the conflict between policymakers' goals (inflation control, sustainable growth, financial stability, and foreign sector stability), differences in the time periods of achieving these goals, and different efficiency of policy tools in different business-political periods, in practice, has made policymaking more complex. In this regard, key interest rate management has recently been used in the Iranian economy as a traditional policy tool that has been most actively and effectively used in emerging and industrial economies over the past five decades. Still, the experience of other countries shows that the effective implementation of this approach, or in other words, the effect of policy interest rates on current interest rates in the economy, requires the provision of infrastructure and the implementation of complementary reforms in institutional, regulatory, market, and other policy instruments. For example, long-term management of the net gross domestic savings deficit in general and the government budget deficit in particular, avoiding monetary imbalances along with the equalization of interest rates on credit facilities (institutional risk-based differences) in the range of interest rate vectors, and the promotion of financial health and prudential supervision of financial intermediaries (financial and credit institutions) on the one hand improve the implementation of monetary policy and on the other hand, increase the efficiency of the money transfer mechanism. Also, in the revaluation of assets in the central bank balance sheet and to avoid monetary transfer effects, virtually all non-operating profits from the revaluation of Rial and foreign currency assets should be blocked and maintained in the form of a foreign exchange reserve account (as in the seventies and eighties).

Overall, an examination of the requirements and challenges of the interest rate management approach to achieving sustainable non-inflationary growth shows that despite the need to shift monetary policymakers from monetary base management to interest rate management, challenges over performance and limitations over lack of diversity in policy instruments, institutional and regulatory weaknesses, and the lack of a unified money market have led to the monetary policy requiring extensive reforms to manage and address these challenges. In other words, in the current situation, the infrastructure of the credit transfer mechanism needs to be strengthened so that by placing bonds as collateral for government debt to the central bank and the banking network, even with the continuous and disproportionate growth of other central bank balance sheet assets (foreign assets and other assets), the implementation of open market operations to affect the average policy interest rates and, consequently, aggregate demand, be accompanied by increased efficiency.  Therefore, in the short and medium-term, the management of monetary units is still unavoidable; however, it is necessary to implement the following measures to provide monetary policy infrastructure based on interest rates during the transition period.

·        Diversify money market instruments such as money market accounts, money market funds using the banking network's capacity, and the use of its funds in underwriting government bonds and treasury bills, etc.

·        Strengthen precautionary and regulatory measures on the growth of banks' balance sheet items, asset composition, as well as their capital and debt structure.

·        Debt securities of public institutions and their ranking, and

·        Launching a system of dedicated traders for underwriting and marketing government debt securities.