Interest swap: The nature, functions, and analysis from the Shariah-compliance perspective 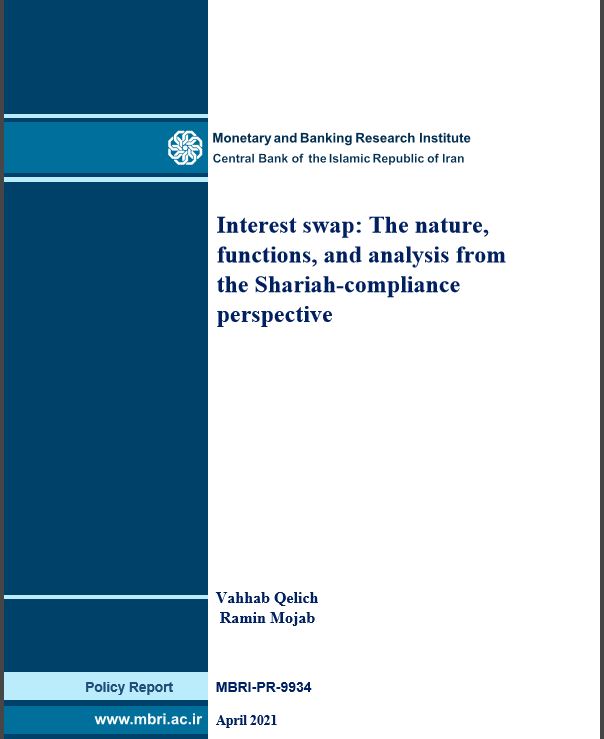 The Monetary and Banking Research Institute has published the report of Interest swap: The nature, functions, and analysis from the Shariah-compliance perspective


According to the public relations of the Monetary and Banking Research Institute, the executive summary of this report states: Interest rate swaps are one of the risk management and hedging tools in a conventional economy. Different expectations about the price changes of bonds (basic assets) are the main force in shaping supply and demand in this market. If bond interest rates are expected to rise, it can enter into a fixed-for-float swap contract and receive a variable rate that is formed over time in exchange for paying a fixed rate - which is determined at the time of the contract. Naturally, regardless of the interest rate risk motivation, profit motives and speculation are also effective in entering into such a contract.

Interest rate swaps in conventional economies are OTC in nature; This means that the terms of the contract between the two parties can be personalized. In this contract, the value of the underlying asset is solely responsible for calculating revenue streams; In other words, this value takes on a hypothetical nature. Of course, this feature does not limit the use of this tool in conventional economies.

Now the question that arises is whether it is possible to use interest rate swaps with a framework that is normally defined? The hypothetical and computational aspect of the value of the underlying asset is one of the first issues that can be problematic in Islamic economics. Apart from that, these contracts are inherently tied to interest rates, and given the considerations of Islamic banking in interest payments, there are also challenges from this perspective. The uncertainty of payment flows can also cause other problems with the terms of the transaction.

The Iranian financial system operates within the framework of Islamic financial standards. In this system, contracts related to instruments must meet all the basic and specific conditions of the transactions' validity. In the Iranian financial system, any transaction concluded between individuals is doomed to correctness and validity until a reason for its corruption and invalidity is revealed. Apart from examining the specific conditions, examining the four basic conditions can help detect corruption or invalidity of contracts: 1- Intention and consent of the parties, 2- Eligibility of the parties, 3- Conditions of the transaction, and 4- Legitimacy for the transaction. Regarding the interest rate swap contract, the focus of the review is more on the third case.

If we can interpret the interest rate swap in the form of a debt-to-debt transaction, we can rule that the use of such instruments is invalid because, first of all, the necessary condition for the sale of debt to debt is that this instrument should be formed on real debt. However, in conventional interest rate swap contracts, to facilitate and enforce the contract, the obligation to pay future cash flows arises out of nothing. In principle, there is no previous and real debt. Second, even if a debt-based swap agreement is formed with a real origin, the main obstacle will be that the sale of debt to debt - also known as the sale of goods to goods - is void according to the text and consensus of the jurists.

Solh contract of debt to debt does not necessarily lead to this kind of instrument's invalidity because as long as this peace is not usurious, it can be considered correct. The necessary condition here is the reality of the debt. For this condition to be met, as in the case above, a situation arises in which debt refers to income flow from underlying assets. However, even with this assumption, we are faced with the suspicion of usury in peace (usurious Solh) because cash flows are not equal to each other.

Interest rate swaps can be considered to be similar to the buying and selling of a similar currency. In this case, debt is not exchanged, but two types of similar cash flows are exchanged. In this interpretation of the interest rate swap, we encounter the suspicion that the sale is Gharar (uncertain). Because, for example, in an exchange model, in exchange for receiving a fixed value, a variable and indefinite value are received. Also, in this interpretation, we are faced with the suspicion of usury; This means that two homogeneous goods with different quantities seem to be traded here.

The suspicion that the swap contract is void is relatively high. Therefore, designing similar contracts can be useful. One of the similar tools that is proposed is "interest rate swap." This contract is a kind of exchange between the two parties in which each party is committed to paying (exchange) cash flows based on a fixed or variable interest rate of other Islamic contracts. Here, too, if a fixed-for-variable contract is introduced, the problem of Gharar (risk) that was raised earlier arises. However, due to the fact that the assets are real, the "conditional sale" can be used here to address this problem; In such a way that the two parties to the contract sell their profitable assets to the other party completely and definitely on the condition that if the seller returns its price, in a definite time, he will own the asset. In each case, they have seized it, despite obstacles we can scarcely imagine. Both of these transactions, in a sense, completely return the asset of the other party. And subsequently, the future return of each asset will be owned by the new owner. Therefore, having indefinite variable returns does not create any problems in terms of being risky in performing this type of swap.