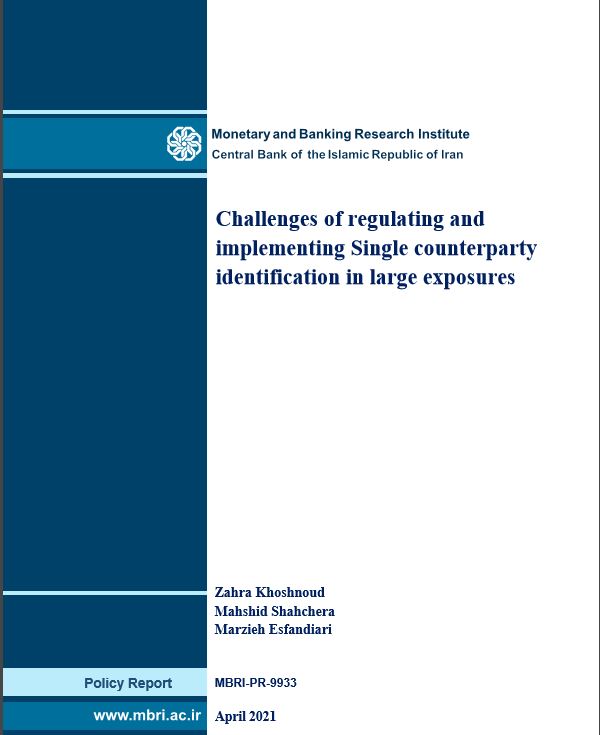 The policy report on the regulatory and executive challenges of identifying a single stakeholder in large facilities and liabilities was published by the Monetary and Banking Research Institute.


According to the public relations of the Monetary and Banking Research Institute, the executive summary of this report states: One of the most important factors shaping credit risk in the banking network is the focus on macro facilities and liabilities, which generally, with the formation of a single beneficiary in customers, brings a high probability of loss in the event of default for banks and credit institutions. Therefore, the identification of a single stakeholder and the management of the risk arising from the large facilities and the commitments that result from it have been considered not only in the guidelines of the Basel Committee, but also in the relevant guidelines in different countries.

In Iran, the first directive in this area in 2003 was notified to the banking network. During the past decades, two other versions have been compiled and implemented; however, due to the high volume of non-current receivables along with identifying the key role of the single counterparty in the formation of these receivables in the country (Mehrparvar, Nabavi, and Najafi Ali, 2016), it is necessary to examine the challenges in identifying and managing risk resulting from the single counterparty in the banking network.

In this regard, in the field of regulation, reviewing the guidelines of the Basel Committee in this field and the guidelines of the sample countries, including the UAE, Indonesia, and India, and their analytical comparison with the draft bylaws and macro commitments shows the relative closeness of the approach of this regulation to the initial draft of the Basel Committee and the guidelines of the countries set up in the Basel Committee prior to the second version of this Guideline. However, the transition of these countries to Basel III - which is also effective in measuring the risk resulting from large facilities and liabilities - to some extent widens the gap between the approach in this area in the country's banking network with sample countries and indicates shortcomings in compared to the minimum standards available. There is a need to design more criteria in identifying the single counterparty compared to the new version of the Basel Committee Guidelines. The exceptions to the inclusion of large facilities and obligations in the existing regulations are based solely on certain government-affiliated entities. However, in the final version of the Basel Committee's Guideline in this regard and the sample countries' guidelines, a wider scope is considered. Therefore, the minimum inclusion of interbank risks and settlement services in the group of exceptions in regulating large facilities and liabilities is recommended.

In this area, although the issue of necessary deterrence in the facility and credit decision can be classified as an internal matter that banks should enter more seriously in that area and close systemic and procedural gaps, the solution of a large part of the problems is the responsibility of the Central Bank (impossibility Identification of a single counterparty in the entire banking network, lack of supplementary instructions, not holding all-thought meetings to evaluate the exit courses of the single counterparty system). Or the need for cooperation of other organizations and institutions with the Central Bank and the mandate by the Central Bank as a supervisor of the banking network (access to up-to-date and verified dynamic information systems, lack of necessary deterrence of the single counterparty system in the decision to grant facilities and credits, lack of thinking in the field of formal mandates).

Therefore, the Central Bank must cooperate with the relevant institutions to achieve the expected level of objectives set out in the regulation. On the accumulation of non-current receivables that requires the Central Bank to prepare, implement, and operate a system for identifying the relationships of individuals, including single counterparties, and connected entities in identifying causal, relative, financial, ownership, managerial, and controlling relationships between individuals and entities at credit institutions have also provided.